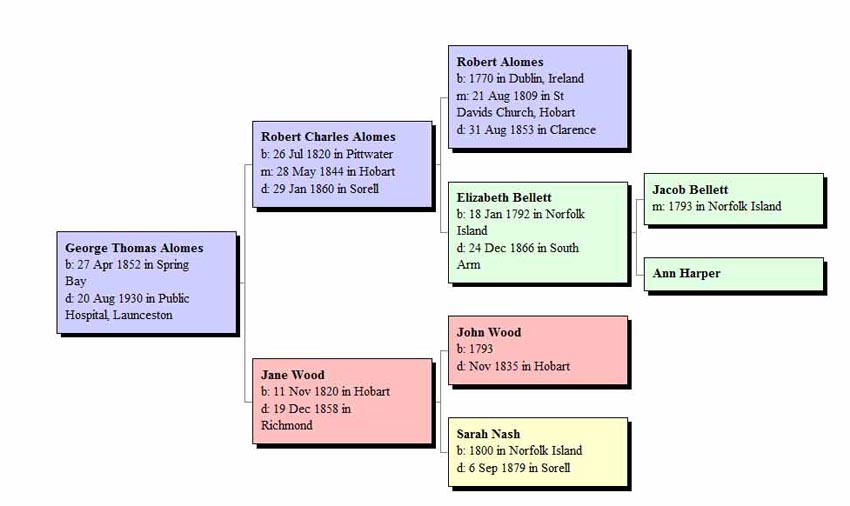 George Thomas Alomes, son of Robert Charles Alomes and Jane Wood, was born on 27 Apr 1852 in Spring Bay, died on 20 Aug 1930 in Public Hospital, Launceston at age 78, and was buried on 22 Aug 1930 in Carr Villa Monumental Cemetery B13/116. George married Margaret Alice Cocker, daughter of John Cocker and Sarah Elizabeth Briggs, on 19 Feb 1879 in Independent Church, Tamar St Launceston. They had two children:

Robert Alomes, son of Colonel Carter of Dublin, Ireland  was born in 1770 in Dublin, Ireland, died on 31 Aug 1853 in Clarence at age 83, and was buried on 5 Sep 1853 in Rokeby. His mother was a Ms. Allomes/Alomes which is thought to come from the french D'Alloems. See the book From Chains to Freedom written by Thais Mason.
Robert Alomes was educated at Trinity College, Dublin. He was studying medicine at Trinity College and after a quarrel enlisted in the Royal Marines under his mother’s name. He entered the army as an ensign, but ran away to England and joined the navy. He was a marine at the siege of Gibraltar, 1732, on the ship "James" under Sir Charles Summers. He quarreled with his father and came to the colonies with Governor Collin’s expedition in HMS Calcutta, as a Royal Marine's Sergeant on 9 Oct 1803.
On 16 Feb 1804 he immigrated to Risdon Cove, near Hobart, Tasmania in the "Ocean". He stepped ashore with the British flag and planted it on behalf of Lieutenant-Governor David Collins, where Hobart is now built. On coming to the colonies he changed his name to Alomes.  The first reference to him is in The Historical Records of Australia Series III Vol.1, p.10 7 where he is included in a list of persons victualled on 17 October 1803, described as a Sergeant.
He was stationed on Norfolk Island on military duties sometime after coming here in 1804. By the Governor’s orders he was brought her to Van Diemen’s Land and was married on 21 Aug 1809 in St. Davids Church, Hobart Town. They were one of the first couples married in Tasmania and when the event took place they were entertained to a wedding breakfast by Governor Collins at Government House, the latter on that occasion presented him with 50 sheep, including several lambs. He received a grant of land at Pittwater 2 miles from Sorell and was a prosperous colonist.
He became a farmer at Pittwater owning 30 acres in 1809. As Robert Carter he married Elizabeth Bellett. Of 11 children born to Robert and his wife, seven were baptised as Carter and four as Alomes, also spelt as Allomes. The following baptisms have been found of children born to the couple, some under the name of Carter and others under the name of Allomes.

A census return for Richmond in 1842 shows Richard Allums [sic] at Ralph's Bay, property by the name of Home Fields. On the return are:

All were Church of England.

Three of Robert Alomes' sons were early settlers at South Arm. John and George Alomes were listed on the electoral roll in 1856, leasing land from George Gellibrand. Later both owned farms. Their brother Robert arrived later after farming at Clarence Plains. George's first wife was Janet McKay and he later married Agnes Musk. His granddaughter, Mrs Potterstill owns part of his farm. His descendants are now living at South Arm, Launceston and the mainland. John Alomes and his wife Rosina Davidson owned the property now called 'Ralphdene' which is presently owned by their great grandson, Don Calvert. John Alomes youngest son Henry inherited the farm. The eldest son Frederick who married Elizabeth Blatherwick after farming at South Arm, moved to a farm in Glenorchy. John James, who married Mary Ann Musk, worked as a draper's assistant in Hobart. Robert Charles Alomes was only on South Arm for a few years before his death in 1860 when his family moved to the farm known as 'Green Island' at Clifton. His wife was Jane Wood of Sorell
Robert married Elizabeth Bellett on 21 Aug 1809 in Hobart.
Children from this marriage were:
i.    Emmaline Alomes
ii.    Edward Alomes
iii.    Jacob Alomes
iv.    Amelia Alomes
v.    John James Alomes
vi.    Elizabeth Carter Alomes was born on 3 Mar 1812 At Sorell and died on 8 Mar 1902 at age 90.
vii.    Robert Charles Alomes (born on 26 Jul 1820 in Pittwater - died on 29 Jan 1860 in Sorell)
viii.    George Thomas Alomes was christened on 18 Feb 1827 in Sorell.

Jacob Bellett arrived on Norfolk Island in 1791 and started farming. By 1793 he was selling his first produce, and in that year he met and married Ann Harper. In December 1808 they were evacuated to Van Diemen’s Land. They first had 45 acres at Queensborough and later were granted 40 acres at Glouster (Sorell). Jacob and Ann had nine children. Their first born child was Elizabeth in 1792. She married Robert Alomes in 1809 who at that time was a sergeant the royal marines. Susannah married John Birchall, Jacob married Mary Fisher, Mary married James Garth, Ann married Edward Garth, William married Catherine Erwin and George married Jirrima Larson.

This Ancestors Page is not a core part of my family tree. It is included to show the ancestors/family of someone who married a person who is in the main tree as well showing links, where they exist, between others in the greater family tree. It is not necessarily fully researched or complete and should not be relied upon without verification.
Corrections and additions are very welcome.