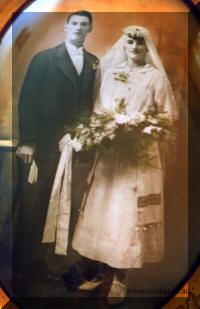 A wedding in which a considerable amount of interest was evinced was celebrated in the Baptist Church Lower Barrington, on the evening of June 18. The Rev. W Heaven was the officiating minister, and the pretty little bridal party stood under an archway, a wedding bell, with the initials F.R. and C. C. on either side. The contracting parties were Frances Maud, fourth daughter of Mr. and Mrs. Thomas Reeves, and Clarence Lewis, youngest son of Mr. and Mrs. J. Cocker of "Bellevue". The bride, who was given away by her father, wore a handsome dress of white silk crepe cloth, the draped skirt being daintily relieved with pink. The bodice had a white net front. showing touches of pink, as did the sailor collar, outlined with tiny pink beads. A white satin sash, with bow, and the usual bridal veil, sure mounted by a spray of orange blossom and another spray tucked into the waistband, completed a very pretty, costume. The bride carried a sheaf of white chrysanthemums and asparagus fern.

There were two bridesmaids- Miss Ruby Reeves (the bride's sister), Miss Minna Cocker (the bridegroom's sister), in white silk. Both wore pale blue silk Egyptian veils, and the bride-groom's gifts, pretty gold brooches, and carried posies of chrysanthemums and ferns. Little Joan Morey (the bridegroom's niece) was maid of honour. She wore a white silk dress, and presented by Mrs. A. Mather (Devonport). Mr. Leslie Reeves was best man and Mr. W. Scott groomsman. As the bride entered the church Miss Scott left the church . Miss Watt played the "Wedding March". On leaving the church the young couple were greeted with a perfect storm of rice and confetti. Several telegrams of congratulation were received, and the happy pair were the recipients of numerous wedding gifts, among them several handsome cheques. Later in the evening Mr. and Mrs. C. L. Cocker motored to Ulverstone on the first stage of their honeymoon. Mrs. Cocker travelled in a grey tagel hat, swathed with gold powdered tulle, and a handsome grey travelling coat, the bridegroom's gift. The bride's gift to the bridegroom was a travelling rug.

They had four children:

Bruce was born on 10 Sep 1936 and attended Barrington School then Sheffield Area School. He took over his parents (Trick & Fanny) farm, Belle Vue, at Lower Barrington in 1964. Belle Vue was subdivided so that Bruce and his parents were able to live in the house while Bruce continued to farm the remainder of the (subdivided) property. He milked cows until he retired and sold the farm in 1978.  He sold it to Vern & Dianne Reeves family, who are related via his mother Fanny.

4-Frances Elaine Cocker was born on 29 Oct 1920 in Nurse Leigh's, Shorewell, Devonport and died in Apr 2001 at age 80. Frances married Eustace William Page, son of Ernest William Page and Ida Christina Eeles, on 30 Mar 1940 in Methodist Church Ulverstone. Eustace was born on 24 Apr 1916 in West Devonport, Tasmania, died in 1993 at age 77, and was buried in Mersey Vale Cemetery. They had three children: Elaine Elizabeth, Denis Rowan and Jill Frances.

4-Clarice Rebecca Cocker was born on 6 Jun 1926 in Belle Vue, Lower Barrington. Clarice married Harold John Lockwood on 28 May 1951 in Baptist Church, Ulverstone, Tasmania. Harold was born on 22 Aug 1922, died on 3 Sep 1993 at age 71, and was buried in West Kentish, Tasmania.  Another name for Harold was Jack. They had four children: Jan Patricia, Sally Maree, Christine and John Grant.

7-Natalie Rebecca Chant was born on 9 May 2006 in Albury, New South Wales.

5-Christopher Dean Cocker was born on 21 Sep 1953 and died on 6 Aug 2003 in Devonport at age 49. Christopher married Pamela Elizabeth Bissett about 1995.  They had two children: Leonie Maree and Jason Charles.

6-Jason Charles Cocker was born on 28 Jan 1976 in Mersey, Devonport. Jason married Tina Coates.  They had one daughter: Sophie Joan.

5-Narelle Sheree Cocker was born on 3 May 1959. Narelle married Warren Alexander on 12 Apr 1986 in Devonport.  They had two children: Bonnie Chevon and Candis Louisa.