When William Percival Dudley enlisted in the AIF in 1916 he stated he was a butcher in Winnaleah and that he had been adopted by Joseph and Emma Cocker. There is no record of his birth. He was formally discharged from the AIF due to rheumatism in his knee which rendered him unfit to drill on 15 Mar 1917.
He married Florence Maud McGuire at Moorina on 17 Feb 1917 and they had two children, Lawrence Percival at Winnaleah on 14 October 1917 and Amy Isabell at Winnaleah on 24 Dec December 1918 in Winnaleah. In September 1921 he, labourer, and Thomas Jacobs, builder, of Ulverstone filed for bankruptcy. From that point he seems to have vanished.
Percy Douglas Cocker and Florence Maud McGuire raised Lawrence and Amy (above) and seven more children between 1920-1933 as their own but none of the births appear to have been registered.  There is no marriage record for Percy Cocker and Florence McGuire.
On 13 Jan 1927 at a creditors meeting Percy Douglas Cocker, a labourer of Ringarooma, disclosed that his liabilities were £308, and that he had no assets. He admitted that he was identical with William Percy Dudley, a labourer, of Moorina, who filed his petition in 1921.
Thus it seems Percy enlisted in an assumed name (perhaps he knew his enlistment would be refused on health grounds if he used his correct name) and he married Florence McGuire in that name before resuming his correct name some time after he was declared bankrupt in 1921 and 1927. 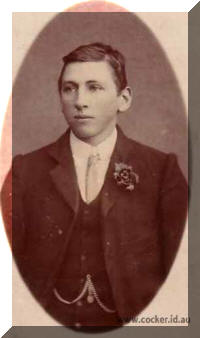 Percy wrote to his brother, Alfred Ernest, on the back of the photo

Dear old Ern,
I got your letter all right, glad to hear you are all well
I suppose you will know this is my self and I hope you are well still
Having rough weather
Best love to all 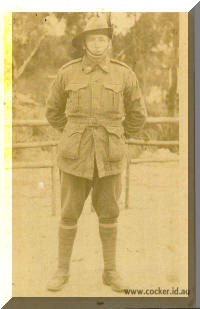 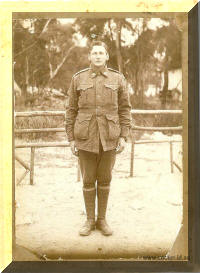 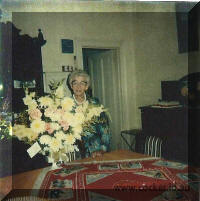 Florence is pictured here aged about 84.

IN MEMORIAM  COCKER.-In fond and loving memory of a dear son and brother, Laurence Percival (Laurie), who passed away September 13, 1946. The sorrow we feel no words can explain, The ache in our hearts will always remain; We loved you in life, we love you yet, You are ours to remember while others forget. Sadly missed. -Inserted by his sorrowing mum and dad, sisters and brothers, and brother-in-law, St. Leonards, Launceston and Deloraine

COCKER.-In fond and loving memory of our dear son and brother, Laurence Percival (Laurie), who died result of accident, September 13, 1946. Our hearts still ache with sadness, Our eyes shed many a tear, God knows how much we miss you, As it dawns the second sad year. What would we give to clasp your hand, Our loving son to see, just to hear your dear sweet voice, Which meant so much to us. Dearly loved and sadly missed. -inserted by his sorrowing mum and dad, sisters and brothers, brothers-in-law, St. Leonards, Launceston. Deloraine and Evandale.

COCKER.--In loving memory of our dear brother, Laurence Percival, who was accidentally killed September 13, 1946. Far away there's a beautiful valley, Where lingers no shadow or pain, Where sojourns for ever will be happy, Where loved ones will meet once again Do you ask the name of that valley," Oh, heart, with wild grief often pressed  'Tis the land of God love and fair  beauty, The beautiful valley of rest. --Inserted by his loving sister, Maris, brother-in-law, Bill, nephew and nieces.

5-Marlene Emillia Cocker was born on 22 Sep 1944 in Launceston, Tasmania. Marlene married Michael McCulloch.  They had a daughter: Olivia.

5-Lawrence Douglas Cocker was born on 24 Mar 1947 in Beaconsfield, Tasmania.

4-Maisie Agnes Grace Cocker was born on 28 Apr 1924 and died on 8 Mar 2011 in Launceston General Hospital, Launceston at age 86. Maisie had a relationship with Eric Campbell.  They had one son: Neville Royce.

5-Neville Royce Cocker. Another name for Neville is Johnny. Neville married Carol.  They had a daughter: Amber.

Maisie next married Norman Rawnsley, son of Len Rawnsley and Isabel.  They had two children: Charles and Stephen.

Much loved wife of Norman (dec.). Loving mother of Johnny, Charles and Stephen and mother in law of Carol, Dee, and Estela. Cherished grandmother of Craig (dec.), Tyger and Rocco, and great grandmother of Amber.
Loved daughter of Percy and Florence Cocker (both dec.), and sister of Laurence, Mavis, Stan, Max, Valma (all dec.), Amy and Beverley.

4-Valma Joyce Cocker was born on 10 May 1931 and died on 11 Sep 2006 at age 75. Valma married Reginald Christopher Cabalzar, son of Christopher Cabalzar and Margaret Evelyn Freeman, on 9 May 1953 in Congregational Frederick Street, Launceston, Tasmania. Reginald was born on 10 May 1915 in East Devonport, Tasmania and died on 11 Dec 2004 at age 89. They had five children: Christopher Reginald, Julie Roseanne, Joy Merrlyn, Wendy Regina and Kerrie Lea.

5-Wendy Regina Cabalzar was born on 5 Jun 1959. Wendy had a relationship with Ray Russell.  They had three children: Linda Jane, Donna Maree and Christopher Ray.

Maxwell next married Elaine Clayton.  They had two children: Tracey and Grant.

5-Naomi Evelyn Cocker was born in 1992. Naomi married Aaron.  They had one daughter: Ella Joy.

4-Beverley Dawn Cocker was born on 16 May 1933. Beverley married Terence Chilcott, son of Roy Stanley Chilcott and Enid Evenett, in 1955 in St Leonards, Launceston. Terence was born in 1929 and died on 15 Oct 2016 in Presbyterian Care, Norwood, Launceston at age 87.

They had two children: Jennifer and Peter.