Jane Evangeline Cocker was born on 22 Oct 1870 in Westbury, Tasmania, was christened on 26 Mar 1871 in Mersey Circuit, Latrobe, and died from pneumonia on 14 Mar 1898 at age 27. Jane was usually known as Eva. Less than two years of age when her father died and not quite four when mother died, Jane was raised by her brother John and his wife Rebecca at Lower Barrington. 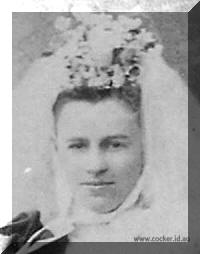 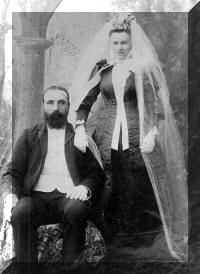 They are both buried together at the Sheffield general cemetery.  See George's obituary below.

They had three children: 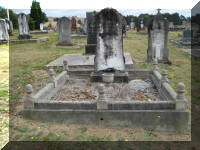 "If earth be filled with grief and woe weep not that I lay here,

In heaven with love and raptures glow Rejoice my soul is there." 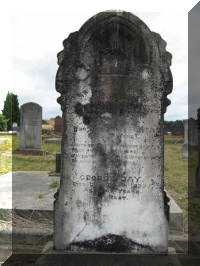 IN MEMORIAM. DAY
In fond and loving remembrance of our dear sister Eva,
who departed this life 14th March, 1898.
"Safe in the arms of Jesus."
Our dear one has departed,
She has gone to heaven to rest
God took her to His home above
He knew well what was best
Though now we miss her sadly,
And mourn her death with pain,
To us it is an earthly loss,
To her a heavenly gain.

Inserted by her loving brother and sister, J. and R. Cocker.

Mr George Day, an old and much respected pioneer of the Kentish district, died at his residence, Kentish on Sunday morning. Born at Deloraine 80 years ago, the late Mr Day when a lad came to Kentish with his parents Mr & Mrs Henry Day. With the exception of a short period, in the employ of Captain W. Jones of Burnie, he had resided in Kentish ever since. Mr Day was a large landowner. In addition to land at Kentish, he selected at Staverton and Lorinna, and by energy & perseverance, converted virgin forest into cultivated fields. He was interested in mining & prospecting. He took no great interest in public affairs but was always ready to assist a worthy cause. He was a prominent draughts player, being a leading member of the Kentish Club. Mr Day was twice married & leaves a widow Mary [nee Carey whom he married in 1929] and daughter, Mrs Jake Collins (Ulverstone) two sons predeceased him. They were Albert who died in the Great War and Benjamin who died recently at Ulverstone.

In the family of six of the late Mr & Mrs Henry Day, the death of Mr George Day is the first in 60 years, the other five surviving members being Messers Leslie Day (Sydney), Charles & Henry Day (Kentish), Mrs Robert Duff (Kentish) and Mrs Robert Braid (Staverton)

The funeral took place on Monday, when a large and representative cortege assembled at the Sheffield cemetery. The chief mourners were Henry and Charles Day (brothers) and Messers R Duff and R Braid (brothers in law) The carriers were six nephews Messers J Duff, C Braid, M Day, H Braid, C Duff and J Mawley.  The pall bearers were Messers A Charleston, A Moore, R Braid, R Duff, A Hope, and W Braid.

Funeral services were conducted at the residence & graveside by Rev. Belot assisted by K Dyer.