Louisa Cocker was born on 8 Nov 1853 in Launceston and was christened on 15 Dec 1853 in Patterson Street Church, Launceston. Louisa married Thomas Rutter, on 11 Apr 1872 in Wesleyan Parsonage District of Port Sorell [Latrobe], Tasmania. Thomas was born in England in 1847 and died on 3 Mar 1917 in Lower Barrington, Tasmania at age 70. 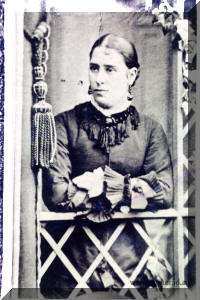 Louisa is pictured above, and right with two unknown children.  Can you identify them?

4-Alice Elvina Cole was born on 27 Feb 1905 in Don, Tasmania. Alice married Plugger Hortle.  They had one daughter: Marie.

3-Thomas Samuel Rutter was born on 2 May 1874 in Port Sorell. Thomas married Vivian May.

3-Walter Leonard Rutter† was born on 27 Sep 1880 in Port Sorell and died on 19 Aug 1916 on Active Service in World War 1at age 35. He lived in New Zealand for several years but returned to Tasmania when war broke out and volunteered here. Private No. 5170, 12th Battalion AIF, he embarked at Melbourne on 29 Mar 1916 on board RMS Orontes with the 12th Infantry Battalion.  He was killed in action on 19 August 1916 at Mouquet Farm when he was hit by a shell and buried where he fell. He is commemorated on the Villers-Bretonneux Memorial, Villers-Bretonneux, Picardie, France.

The Launceston Daily Telegraph of 5 Jul 1906 reported on page 7 on the Barrington versus Sheffield game and noted that he undoubtedly played the best game on the ground.

General satisfaction was expressed when it became known that the prominent footballer Walter Rutter had been selected as one to represent Tasmania in their engagements with teams on the mainland during the visit of the American fleet. As Rutter is a favorite here and elsewhere, his career will be watched with interest.

Lower Barrington news was received on Saturday of the death of Walter Rutter who was well known on the coast as a musician and sportsman. As a footballer he was prominent as a member of the North v South teams and also a member of the Tasmanian interstate team on the mainland.

His official war records include this report of his death:

BARRINGTON. A concert was held in the Methodist Church on Thursday evening to benefit the wife and family of the late Pte. Walter Rutter who was killed in action in France. Mr. J. Nevin  loaned his piano for the occasion. The Warden (Cr. Moore.) occupied the chair. The programme was as follows: Instrumental duets, Misses R. Ratcliffe and Rockliff and Robertson and Bye: songs, Miss Ratcliff. Mr. V. Robertson and Mr. M. M'cInnes: recitations.   Mrs. D. Russell and Miss M. Habrer and I. Rattciff: violin and  R. Robertson: song, school children.The National Anthem was sung after which supper was handed round. The proceeds were £5.

4-Leonard Thomas Rutter was born on 24 Aug 1916 in Don, Tasmania. Leonard married Lorna Mills.  They had one daughter: Dianne.

5-Ian Ronald Jamieson was born on 5 Oct 1952 in Latrobe. Ian married Christine (Chrissy) Louise Bassett. Christine was born on 10 Jul 1953. They had one daughter: Fabienne Bronte.

3-Louise Jane Rutter was born on 21 Oct 1889 in Port Frederick and died on 2 Nov 1978 in Devonport at age 89. Louise married James Herbert Rosevear, son of Thomas Rosevear and Fanny Thomson, on 31 Oct 1917 in St Pauls, East. James was born on 19 Dec 1876 in Launceston. They had three children: Jean Louise, Faye and Pauline.

4-Jean Louise Rosevear was born in 1920 and died on 1 Oct 1975 at age 55. Jean married David Bramich, son of Ernest Aubrey Bramich and Violet May Jeffrey.  They had one son: James.

3-Joseph Charles (Chas) Pickering Rutter was born on 17 Oct 1894 in Sheffield. Jospeh served in World War 1 as a Sergeant in the 40th Battalion. Machine Gun Section. His unit embarked from Hobart, Tasmania, on board HMAT A35 Berrima on 1 July 1916 and he returned to Australia on 23 Jul 1919.